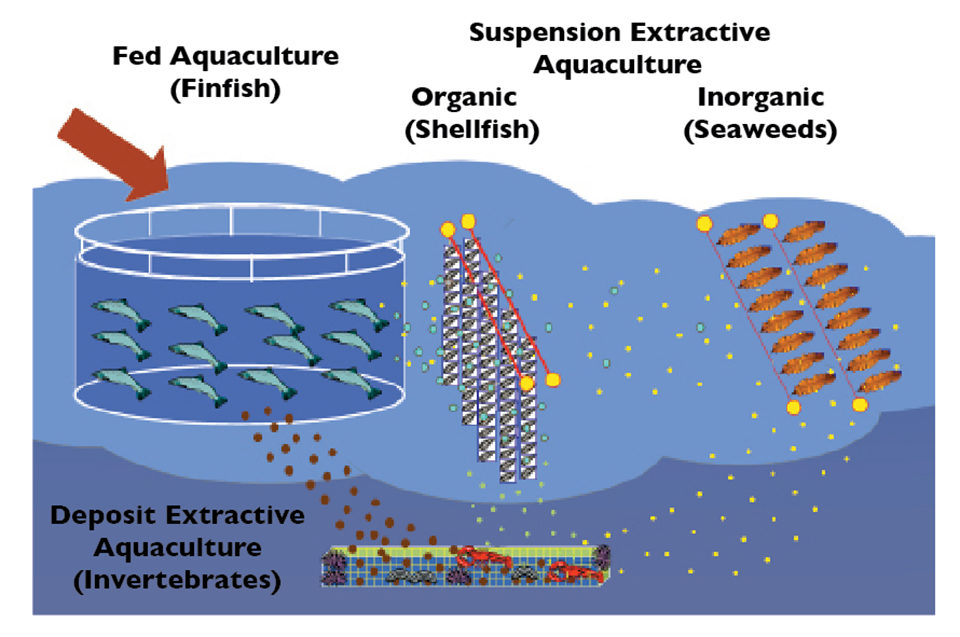 Integrated Multi-Trophic Aquaculture is a form of polyculture which mimics the nutrient flows in natural systems to produce multiple outputs from a food production system.

In conventional fin fish farming, around 60% of the nitrogen in the fish feed is lost to the wider ecosystem and can have negative ecological impacts if presented in high concentrations.

Growing seaweed, shellfish and other marine life are grown in close proximity to the farmed fin fish in order to maximise uptake of the nutrients.

The shellfish benefit from the organic particulates and the seaweed from the soluble nutrients including nitrogen. Polyculture, the process of growing multiple crops in the same space, can also provide a more resilient production system; both in a commercial sense from having a wider product range to sell and in an ecological sense from being based on a managed ecosystem.

Here at Green Ocean Farming, we are looking at setting up multi trophic aquaculture sites so that each of the crops or harvests benefit from the others around them.

Our aim is to farm a small number of fin fish other than Salmon or Trout, which will be farmed in unison with shellfish such as Scallops, Oysters or Clams grown alongside seaweed and also bottom feeder such as sea cucumbers and possibly sea urchins.

Investing in Green Ocean IMTA will start at £45,000 more information will be available in the near future.

The economic and environmental benefits of nutrient recycling can be used as the basis for a more resilient fin fish farming industry and for the wider renewable marine aquaculture sector.

The remains of the plant life sink to the bottom, where they are consumed by bacteria, further decreasing the dissolved oxygen levels, creating hypoxic conditions.

Top down approach that reduces the nitrogen in the water body through the use of shellfish aquaculture as well as enhancing tidal exchange.

Bottom up approach focuses on reducing emissions from point sources, including wastewater treatment plants as well as reducing nitrogen inputs from population and run-offs from fertiliser used in agriculture.   Bivalve shellfish - oysters, clams and mussels - feed on algae and other microscopic food found in coastal bays and estuaries. The food eaten by shellfish contains nutrients that are available in the food, including nitrogen, phosphorus and carbon. When bivalves feed on these particles, they use these nutrients to grow, filtering and cleaning coastal waters, benefitting underwater plants and other marine life. The bivalve tissue and shells contain nitrogen from the filtering of nutrients for growth. 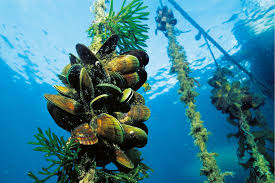